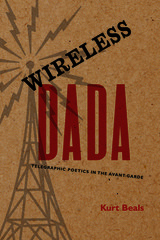 Wireless Dada: Telegraphic Poetics in the Avant-Garde demonstrates that the poetics of the Dada movement was profoundly influenced by the telegraph and the technological and social transformations that it brought about in the nineteenth and early twentieth centuries. While telegraphy’s impact on Italian Futurism and German Expressionism is widely acknowledged, its formative role in Dada poetics has been largely neglected. Drawing on media history and theory, avant-garde studies, and German literary studies, Kurt Beals shows how the telegraph and the cultural discourses that surrounded it shaped the radical works of this seminal avant-garde movement. The “nonsense” strain in Dada is frequently seen as a response to the senseless violence of the First World War. Beals argues that it was not just the war that turned Dada poetry into a jumble of senseless signals—it was also the wireless.