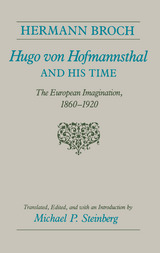 Hermann Broch (1886-1951) is remembered among English-speaking readers for his novels The Sleepwalkers and The Death of Virgil, and among German-speaking readers for his novels as well as his works on moral and political philosophy, his aesthetic theory, and his varied criticism. This study reveals Broch as a major historian as well, one who believes that true historical understanding requires the faculties of both poet and philosopher.

Through an analysis of the changing thought and career of the Austrian poet, librettist, and essaist Hugo von Hofmannsthal (1874-1929), Broch attempts to define and analyze the major intellectual issues of the European fin de siècle, a period that he characterizes according to the Nietzschean concepts of the breakdown of rationality and the loss of a central value system. The result is a major examination of European thought as well as a comparative study of political systems and artistic styles.
TABLE OF CONTENTS

Hugo von Hofmannsthal and His Time
1. Art and Its Non-Style at the End of the Nineteenth Century
1. Rationality and Decoration
2. The Turn Away from Decoration
3. The Value Vacuum of German Art
4. Vienna's Gay Apocalypse of 1880
5. The Political Vacuum
6. Sociology of the Gay Apocalypse
2. Formation and Assertion of a Personality Inside the Vacuum
1. History of an Assimilation
2. Wunderkind: Wondrous Child, Child Gazing on Wonder
3. Dream as Life: The Call to Poetry
4. The Second Assimilation
5. Life as Symbol: The Call to Style
3. Hugo von Hofmannsthal's Prose Writings
1. The Turn Away from Lyricism and the "Letter of Lord Chandos"
2. The Narrative Work
3. The Turn Away from Epic: The Essayistic Writings
4. The Tower of Babel
1. Fin de siècle, fin d'un millénaire
2. A la recherche des temps perdus
3. Ethical Art
Notes
Hermann Broch: A Select Bibliography
Index