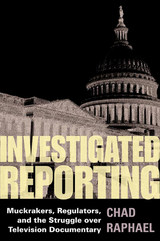 The public often views television investigative reporting as a watchdog on the government. In fact, some of the centerpiece moments of TV muckraking relied heavily on official sources for inspiration, information, and regulatory protection from critics. At the same time, criticism by government officials and overt threats to regulate the television industry influenced the decision-making and content that went into some of broadcast news's iconic moments.

Chad Raphael's looks at the relationship between journalism and regulation during the celebrated period of muckraking that took place on American television between 1960 and 1975. Raphael offers new insights into the economic, political, and industrial forces that shaped documentaries like Harvest of Shame, Hunger in America, and Banks and the Poor while placing the investigative television documentary into its institutional, regulatory, and cultural context. Throughout, Raphael exposes the complex strands of influence used by government officials to shape--and attack--investigative reporting, and highlights how these tactics created a troubling legacy for the regulation of television news today.

AUTHOR BIOGRAPHY
Chad Raphael is a professor of communication at Santa Clara University. He is coeditor of Deliberation, Democracy, and Civic Forums: Improving Equality and Publicity.
REVIEWS
Recipient of the Frank Luther Mott--Kappa Tau Alpha Research Award at the Association for Education in Journalism and Mass Communication meeting  (2006); Recipient of  the 2006 History Division Book Award of the AEJMC; and winner of the 2005 Donald McGannon Award for Social and Ethical Relevance in Communications Policy Research.
— Frank Luther Mott--Kappa Tau Alpha Research Award