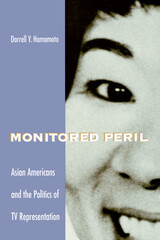 Early in the movement of Asian labor to the United States, immigrants from the Far East were viewed by the dominant Euro-American society as a peril to a white, Christian nation. How far have we come since then? This first comprehensive study of Asian American representation on network television supplies some unsettling answers.

A meticulous work of history, cultural criticism, and political analysis, Monitored Peril illuminates the unstable relationship between the discursive practices of commercial television programs, liberal democratic values, and white supremacist ideology. The book clearly demonstrates the pervasiveness of racialized discourse throughout U.S. society, especially as it is reproduced by network television.

In treating his topic, Darrell Hamamoto addresses a wide variety of issues facing diverse Asian American communities: interracial conflict, conservative politics, U.S.-Japan trade friction, and postcolonial Vietnam. Through an examination of selected programs from the 1950s to the present, he attempts to correct the consistently distorted optic of network television. Finally, he calls for an engaged independent Asian American media practice, and for the expansion of public sector television.

"Darrell Y. Hamamoto's critical and scholarly examination of Asians in television media serves as a stimulating and timely discourse on the state of Asian America within the strict boundaries known as American network television. Hamamoto presents a sophisticated solution to the problem of cultural misappropriation and false representation of Americans of Asian descent." --Pacific Reader

"Darrell Y. Hamamoto makes a valuable contribution to our understanding of race, representation, and power with this comprehensive study of television programs about Asians and Asian Americans in the United States." --Journal of Asian American Studies

Darrell Y. Hamamoto is a lecturer in the program of comparative culture at the University of California, Irvine. He is the author of Nervous Laughter: Television Situation Comedy and Liberal Democratic Ideology (1991).