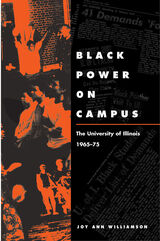 Joy Ann Williamson charts the evolution of black consciousness on predominately white American campuses during the critical period between the mid-1960s and mid-1970s, with the Black student movement at the University of Illinois at Urbana-Champaign serving as an illuminating microcosm of similar movements across the country. Drawing on student publications of the late 1960s and early 1970s, as well as interviews with student activists, former administrators, and faculty, Williamson discusses the emergence of Black Power ideology, what constituted "blackness," and notions of self-advancement versus racial solidarity.

AUTHOR BIOGRAPHY
Joy Ann Williamson, an alumna of the University of Illinois at Urbana-Champaign, is an associate professor of educational leadership and policy studies in the College of Education at the University of Washington.

REVIEWS
"Offers a rich and complex view of the various ways black students sought to construct their social, political and racial identities, while helping to, in part, reform the University of Illinois for future generations of racially underrepresented students."
--History of Education Quarterly


"A superbly written historical study focusing on one of the most controversial periods in American higher education reform."
--Education Review

TABLE OF CONTENTS
Cover
Title Page
Contents
Acknowledgments
Abbreviations
Introduction
1. Black Youth Forcing Change
2. From Negro to Black: The Black Students Association
3. The Special Educational Opportunities Program
4. The Launching of a Movement
5. “We Hope for Nothing; We Demand Everything”
6. A Lasting Influence
Appendix A: List of Interviewees
Appendix B: BSA Demands
Notes
Index