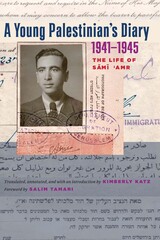 Writing in his late teens and early twenties, Sāmī ‘Amr gave his diary an apt subtitle: The Battle of Life, encapsulating both the political climate of Palestine in the waning years of the British Mandate as well as the contrasting joys and troubles of family life. Now translated from the Arabic, Sāmī's diary represents a rare artifact of turbulent change in the Middle East.

Written over four years, these ruminations of a young man from Hebron brim with revelations about daily life against a backdrop of tremendous transition. Describing the public and the private, the modern and the traditional, Sāmī muses on relationships, his station in life, and other universal experiences while sharing numerous details about a pivotal moment in Palestine's modern history. Making these never-before-published reflections available in translation, Kimberly Katz also provides illuminating context for Sāmī's words, laying out biographical details of Sāmī, who kept his diary private for close to sixty years. One of a limited number of Palestinian diaries available to English-language readers, the diary of Sāmī ‘Amr bridges significant chasms in our understanding of Middle Eastern, and particularly Palestinian, history.

Kimberly Katz is Associate Professor of Middle East History at Towson University in Towson, Maryland. She is also the author of Jordanian Jerusalem: Holy Places and National Spaces.

REVIEWS
A Young Palestinian’s Diary is a qualitative contribution to the rewriting of Palestinian history…Kimberly Katz must be credited for her invaluable contributions to the book. She provides detailed context for each event and, when necessary, ‘Amr’s reflections…Diaries like Sami ‘Amr’s serve as a rich and insightful resource for the study of the social and political life of Palestinians…
— Journal of Palestine Studies