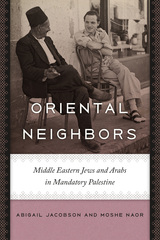 Focusing on Oriental Jews and their relations with their Arab neighbors in Mandatory Palestine, this book analyzes the meaning of the hybrid Arab-Jewish identity that existed among Oriental Jews, and discusses their unique role as political, social, and cultural mediators between Jews and Arabs. Integrating Mandatory Palestine and its inhabitants into the contemporary Semitic-Levantine surroundings, Oriental Neighbors illuminates broad areas of cooperation and coexistence, which coincided with conflict and friction, between Oriental and Sephardi Jews and their Arab neighbors. The book brings the Oriental Jewish community to the fore, examines its role in the Zionist nation-building process, and studies its diverse and complex links with the Arab community in Palestine.
AUTHOR BIOGRAPHY
ABIGAIL JACOBSON is academic director of the Mediterranean Neighbors program, Van Leer Jerusalem Institute. She is author of From Empire to Empire: Jerusalem between Ottoman and British Rule. MOSHE NAOR is assistant professor in the department of Israel Studies at the University of Haifa. He is the author of Social Mobilization in the Arab/Israeli War of 1948: On the Israeli Home Front.
TABLE OF CONTENTS


Acknowledgments • Introduction • The Road Not Taken: The Ethnic Problem and the Arab Question • Natives of the Orient: Political and Social Rapprochement • Cultural Politics: Journalistic, Cultural, and Linguistic Mediation • Mixing and Unmixing in the Oriental Ghettos • Crossing the Lines: The Security Border between Jews and Arabs • Epilogue • Notes • Bibliography • Index