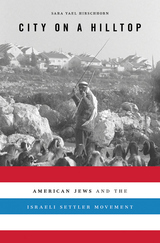 Since Israel’s 1967 war, more than 60,000 Jewish-Americans have settled in the occupied territories, transforming politics and sometimes committing shocking acts of terrorism. Yet little is known about why they chose to live at the center of the Israeli-Palestinian conflict. Sara Yael Hirschhorn unsettles stereotypes about these liberal idealists.