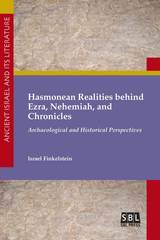 A thorough case for a later date for of Ezra, Nehemiah, and Chronicles

In this collection of essays, Israel Finkelstein deals with key topics in Ezra, Nehemiah, and 1 and 2 Chronicles, such as the list of returnees, the construction of the city wall of Jerusalem, the adversaries of Nehemiah, the tribal genealogies, and the territorial expansion of Judah in 2 Chronicles. Finkelstein argues that the geographical and historical realities cached behind at least parts of these books fit the Hasmonean period in the late second century BCE. Seven previously published essays are supplemented by maps, updates to the archaeological material, and references to recent publications on the topics.

Israel Finkelstein is Professor Emeritus of Archaeology at Tel Aviv University. He is a member of the Israel Academy of Sciences and Humanities and correspondant étranger of the French Académie des Inscriptions et Belles Lettres. He is the author or editor of more than 350 articles and many books, including The Forgotten Kingdom: The Archaeology and History of Northern Israel (2013). He serves as editor of the journal Tel Aviv.

TABLE OF CONTENTS
Cover
Contents
List of Figures
Abbreviations
Introduction
Jerusalem in the Persian (and Early Hellenistic) Period and the Wall of Nehemiah
Archaeology and the List of Returnees in the Books of Ezra and Nehemiah
The Territorial Extent and Demography of Yehud/Judea in the Persian and Early Hellenistic Periods
Nehemiah’s Adversaries
The Historical Reality behind the Genealogical Lists in 1 Chronicles
Rehoboam’s Fortified Cities (2 Chr 11:5–12)
The Expansion of Judah in 2 Chronicles
Conclusions
Bibliography
Biblical References Index
Modern Authors Index
Place Names Index
Ancient Figures Index