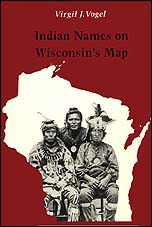 Indian Names on Wisconsin's Map
by Virgil J. Vogel
University of Wisconsin Press, 1992
Paper: 978-0-299-12984-2
"Of all the states of the American union, none has a name that has been spelled in more ways, or interpreted more variously, than Wisconsin.  Among the spellings listed are Mesconsin, Meskousing, Mishkonsing, Ouisconsens, Ouisconsin, Ouisconsing, Ouiscousing, Ouiskonsin, Owisconsing, Quisconsing, Weeskonsan, Wisconsan, Wisconsin, Wishkonsing, and Wiskonsin.  The name has been attributed to the French, Menominee, Ojibwa, Potawatami, Sauk-Fox, and Winnebago languages."
Place names are cultural artifacts that tell us as much about how people lived as do relics dug from the ground, writes Virgil Vogel, one of America's foremost authorities on place names.  They are historical records from which the location and migration of people, plants, and animals can be charted.  Onalaska and Aztalan, not surprisingly, are place names transplanted to Wisconsin from the far north and south.  Some names tell of topographic features that have long since disappeared or are little noticed today.  Beaver Dam once had an Indian name meaning just that; Sheboygan, "big pipe" in Ojibwa, described the shape of a river bend.  Other names are vestiges of ancient languages nowhere else recorded.  Some commemorate historic events:  Winneconne is believed by many to mean "place of the skulls."
The Indian names of Wisconsin's towns, rivers, and lakes reveal the minds of the Indian peoples, their cosmic views, their values, their relation to their environment , and their ways of life and convey as well something of the history of their white invaders.
Virgil Vogel's thirty years of research into Native American influence on geographical names has resulted in an absorbing account that illuminates the history and culture of Wisconsin Indians.  Vogel tells his story thematically—names from the spirit world, names of trails and portages, French-Indian personal names, tribal names, and so on—to show that place names are part of a larger cultural and natural world.  In recovering the history and meaning of these names, he has restored an important and colorful part of America's heritage.
AUTHOR BIOGRAPHY
Virgil J. Vogel, professor emeritus of history and social science at Harry S. Truman College, City Colleges of Chicago, is the author of Indian place name books for Iowa, Illinois, and Michigan in addition to This Country Was Ours: A Documentary History of the American Indian and American Indian Medicine.
REQUEST ACCESSIBLE FILE