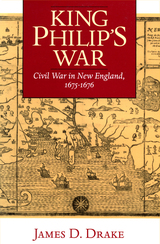 King Philip's War: Civil War in New England, 1675-1676
by James D. Drake and James D. Drake
University of Massachusetts Press, 2000
Paper: 978-1-55849-224-0
Sometimes described as "America's deadliest war," King Philip's War proved a critical turning point in the history of New England, leaving English colonists decisively in command of the region at the expense of native peoples. Although traditionally understood as an inevitable clash of cultures or as a classic example of conflict on the frontier between Indians and whites, in the view of James D. Drake it was neither. Instead, he argues, King Philip's War was a civil war, whose divisions cut across ethnic lines and tore apart a society composed of English colonizers and Native Americans alike. According to Drake, the interdependence that developed between English and Indian in the years leading up to the war helps explain its notorious brutality. Believing they were dealing with an internal rebellion and therefore with an act of treason, the colonists and their native allies often meted out harsh punishments. The end result was nothing less than the decimation of New England's indigenous peoples and the consequent social, political, and cultural reorganization of the region. In short, by waging war among themselves, the English and Indians of New England destroyed the world they had constructed together. In its place a new society emerged, one in which native peoples were marginalized and the culture of the New England Way receded into the past.
AUTHOR BIOGRAPHY
James D. Drake is assistant professor of history at Metropolitan State College of Denver.