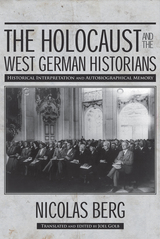 This landmark book was first published in Germany, provoking both acclaim and controversy. In this "history of historiography," Nicolas Berg addresses the work of German and German-Jewish historians in the first three decades of post–World War II Germany. He examines how they perceived—and failed to perceive—the Holocaust and how they interpreted and misinterpreted that historical fact using an arsenal of terms and concepts, arguments and explanations.
This English-language translation is also a shortened and reorganized edition, which includes a new introduction by Berg reviewing and commenting on the response to the German editions. Notably, in this American edition, discussion of historian Joseph Wulf and his colleague and fellow Holocaust survivor Léon Poliakov has been united in one chapter. And special care has been taken to make clear to English speakers the questions raised about German historiographical writing. Translator Joel Golb comments, "From 1945 to the present, the way historians have approached the Holocaust has posed deep-reaching problems regarding choice of language. . . . This book is consequently as much about language as it is about facts."
AUTHOR BIOGRAPHY
Nicolas Berg is a research fellow at the Simon Dubnow Institute and teaches in the Department of History at the University of Leipzig. He is the author of several books about Jews and anti-Semitism in Germany. Joel Golb is an independent editor and literary historian. He lives in Berlin.
TABLE OF CONTENTS

Introduction to the American Edition
1 Tragedy, Fate, and Breach: Friedrich Meinecke's The German Catastrophe (1946) and the Paradoxes of "National-Historical" Interpretation
2 "A Large Dark Stain on the German Shield of Honor": Gerhard Ritter, Hans Rothfels, and the Denationalization of National Socialism
3 Hermann Heimpel, Reinhard Wittram, and Fritz Ernst: A "Demonstration of Protestant Penitence" in 1950s Germany
4 "How Difficult It Is Not to Write Powerfully about Auschwitz!": The Early Years of Munich's Institute for Contemporary History
5 "Prehistorical Excavations" and "Absolute Objectivity": On the Travail of the Polish-Jewish Historian of the Holocaust Joseph Wulf