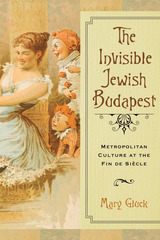 Budapest at the fin de siècle was famed and emulated for its cosmopolitan urban culture and nightlife. It was also the second-largest Jewish city in Europe. Mary Gluck delves into the popular culture of Budapest’s coffee houses, music halls, and humor magazines to uncover the enormous influence of assimilated Jews in creating modernist Budapest between 1867 and 1914. She explores the paradox of Budapest in this era: because much of the Jewish population embraced and promoted a secular, metropolitan culture, their influence as Jews was both profound and invisible.
AUTHOR BIOGRAPHY
Mary Gluck is a professor of history and Judaic studies at Brown University. She is the author of Georg Lukács and His Generation, 1900–1918 and Popular Bohemia: Modernism and Urban Culture in Nineteenth-Century Paris.
REVIEWS
“A profoundly insightful analysis.”—Times Literary Supplement


“This book does not disappoint. On the contrary, Gluck has produced a true tour de force, seamlessly wedding together the most engaging aspects of Hungarian Jewish history, cultural, and urban life.”—Hungarian Studies Review


“In this fascinating, well-documented history of short-lived Jewish Budapest, Mary Gluck presents the questions of modernity and of Jewish identity as the central dynamics of this culture. . . . Both scholarly and entertaining.”—Jewish Currents

Introduction: Jewish Budapest as a Symbolic Space
1 Cultural Visions of the Emerging City
2 The Jewish Question and the Paradox of Hungarian Liberalism
3 A Jewish Politician in a Divided Public Space
4 The Jewish Humor Magazine and Collective Self-Parody
5 The Scandal of the Budapest Orpheum
6 Critical Cross-Dressing and Jewish Bourgeois Identity
Epilogue: The Waning of Jewish Budapest after World War I