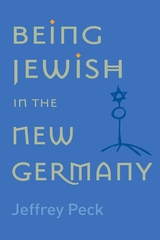 Germany today boasts the fastest growing population of Jews in Europe. The streets of Berlin abound with signs of a revival of Jewish culture, ranging from bagel shops to the sight of worshipers leaving synagogue on Saturday. With the new energy infused by Jewish immigration from Russia and changes in immigration and naturalization laws in general, Jeffrey M. Peck argues that we must now begin considering how Jews live in Germany rather than merely asking why they would choose to do so.

In Being Jewish in the New Germany, Peck explores the diversity of contemporary Jewish life and the complex struggles within the community-and among Germans in general-over history, responsibility, culture, and identity. He provides a glimpse of an emerging, if conflicted, multicultural country and examines how the development of the European Community, globalization, and the post-9/11 political climate play out in this context. With sensitive, yet critical, insight into the nation's political and social life, chapters explore issues such as the shifting ethnic/national makeup of the population, changes in political leadership, and the renaissance of Jewish art and literature. Peck also explores new forms of anti-Semitism and relations between Jews and Turks-the country's other prominent minority population.

In this surprising description of the rebirth of a community, Peck argues that there is, indeed, a vibrant and significant future for Jews in Germany. Written in clear and compelling language, this book will be of interest to the general public and scholars alike.

AUTHOR BIOGRAPHY
Jeffrey M. Peck is a professor in communication, culture, and technology at Georgetown University and a senior fellow in residence at the American Institute for Contemporary German Studies. He is the coauthor of Sojourners: The Return of German Jews and the Question of Identity and the coeditor of Culture/Contexture: Explorations in Anthropology and Literary Studies.
TABLE OF CONTENTS