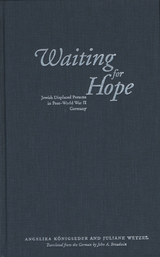 After the defeat of Germany in World War II, more than a hundred thousand Jewish survivors of the Holocaust were transported to camps maintained by the allies for displaced persons (DPs). In this new history, historians Angelika Königseder and Juliane Wetzel offer a social and cultural history of the post-WWII displaced persons camps.

Starting with the discovery of death camps by Allied forces, Königseder and Wetzel describe the inadequate preparations made for the survivors. The soldiers were ill equipped to deal with the physical wreckage and mental anguish of their charges, but American rabbis soon arrived to perform invaluable work helping the survivors cope. The historians also devote attention to autonomous Jewish life in and near the camps: theater groups and orchestras prospered, schools were founded, a tuberculosis hospital and clinic for DPs was established, and underground organizations handled illegal immigration to Israel and trained soldiers to fight in Palestine.

Drawing on original documents and the work of other historians, Waiting for Hope sheds light on a largely unknown period in postwar Jewish history and shows that the suffering of the survivors did not end with the war.
AUTHOR BIOGRAPHY
ANGELIKA KÖNIGSEDER and JULIANE WETZEL are historians affiliated with the Institute for the Study of Anti-Semitism in Berlin.
TABLE OF CONTENTS