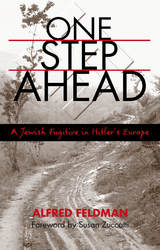 Through compelling personal accounts and family correspondence, One Step Ahead documents Alfred Feldman’s harrowing flight into exile as he and his family fled the pogroms that flooded across Nazi-occupied Europe. It is a memoir of horror and hope recounted by a man who survived the organized terror of Hitler’s "Final Solution" as it destroyed entire generations of European Jewish life within ten catastrophic years in the mid-twentieth century. Feldman’s memoir conveys the searing pain that has never left him, while demonstrating the triumphant humanity of a survivor.

Feldman vividly describes the impact of the escalating anti-Semitic hatred and violence in Germany during the 1930s, the impact of the notorious Nuremberg Laws in 1935, and the terrifying Kristallnacht pogrom in 1938. By age sixteen, Feldman was living with his parents and three younger sisters in Antwerp, Belgium, during the 1939 German invasions of Poland, marking the start of World War II. In the face of increasing persecution, Feldman’s extended family scattered over the globe in a desperate attempt to remain one step ahead of their Nazi pursuers.

Recalling his life on the run, Feldman describes what few survivors have chosen to write about: the Vichy raids of August 26, 1942; the French labor brigades; the Comité Dubouchage; and life in super-vised residence in France under the Italians. While in the south of France, Feldman endured food shortages and Nazi anti-Semitic measures, beginning with work camps and culminating in the deportation and ultimate death of his mother and sisters at Auschwitz.

To evade the Germans, Feldman and his father fled into the Italian Alps in September of 1943, hiding between the Allies and the Germans. Aided by local villagers, the Feldmans survived precariously for over a year and a half, along with other Jewish refugees, until that region was liberated. Only then, and only gradually, did Feldman manage to piece together the fate of his surviving family and learn at last of the death of his mother and sisters.

Now, as an adult, Alfred Feldman has retraced his escape and exile, taking his wife and children to his hometown in Germany, the mountains in Italy, and Montagnac, where a plaque commemorates his mother and sisters.

Born in Hamburg, Germany, in 1923, Alfred Feldman is a retired chemist and computer systems consultant.

TABLE OF CONTENTS
Cover
Title Page
Copyright
Contents
List of Illustrations
Foreword: Susan Zucotti
Acknowledgments
Genealogy of the Feldman Family
1. How We Arrived in Germany, and How We Left
2. The Halfway House
3. Practice Makes Perfect
4. A Crazy Summer
5. Time Turns Back
6. The Warmth of a Mother’s Love
7. My Life as Somebody Else
8. A Biblical Migration
9. Vogelfrei
10. A Failed Rescue
11. The Cave of San Mauro
12. The Privilege to Be Shot as a Partisan
13. The Oldest Instinct
14. A Voyage of Discovery
15. Aftershocks
16. The Past Revisited
Chronology
Letters
Notes
About the Author
Back Cover