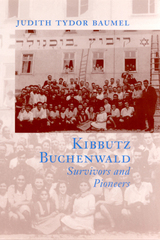 Kibbutz Buchenwald is the story of a nightmare that became a dream and a dream that became a reality. Emerging from the depths of the liberated concentration camp Buchenwald in the spring of 1945, a group of sixteen gaunt and battered young men organized and formed Kibbutz Buchenwald, the first agricultural collective in postwar Germany designed to prepare Jews for emigation to Palestine. What caused a handful of survivors to take their fate into their own hands within days of their liberation, at a time when most survivors were passively awaiting orders from the occupying forces? From what wellsprings did they draw the physical and emotional strength to begin life anew as Zionist pioneers in a world which had turned upside down?

Judith Baumel's moving account of this courageous group is divided into two parts. Part One, entitled "The Dream," examines the kibbutz from its creation in Germany until the departure of the founding group for Palestine in the summer of 1945. Part Two, "The Reality," follows the members of Kibbutz Buchenwald into Palestine, where they eventually established their own independent settlement in 1948. This settlement exists as Kibbutz Netzer Sereni today.

Drawing from the diaries of the kibbutz's founding members, Baumel provides a detailed account of an incredible story and places the central narrative in the larger contexts of communal living, European politics after the war, and the link between European Jewry and Israeli postwar nationhood. An afterword, "Where Are They Now," briefly describes the later life of each of the original kibbutz members.

AUTHOR BIOGRAPHY
Judith Tydor Baumel teaches at the Department of Jewish History at the University of Haifa, Israel. She has written several books on the Holocaust including Unfulfilled Promise and Kol Bechigyot: The Holocaust and Prayer.