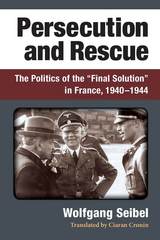 In 1942, two years after invading France, the Germans implemented their policy of exterminating the Jews. In contrast to Jews in many parts of German-occupied Europe, however, the majority of Jews in France survived, thanks to opposition to the Nazi extermination policy from Church dignitaries and the moral indignation of the average Frenchmen. Seeking to maintain popular support, the Vichy Regime bargained with the Germans over the substance and extent of its collaboration, which the Germans needed in order to hold France.

Translated from the German and drawing on German and French sources, Wolfgang Seibel traces the twisted process of political decision-making that shaped the fate of the Jews in German-occupied France during World War II. By analyzing the German-French negotiations, he reveals the underlying logic as well as the actual course of the bargaining process as both the Vichy Regime and the Germans sought a stable relationship. Yet that relationship was continually reshaped by the progress of the war, Germany’s deteriorating prospects, France’s economic and geopolitical position, and the Vichy government’s quest for domestic political support. The Jews’ suffering intensified when the Germans had the upper hand; but when the French felt empowered, the Vichy Regime stopped collaborating in the completion of the “final solution.” Persecution and Rescue: The Politics of the “Final Solution” in France, 1940–1944 demonstrates the ways in which political circumstances can mitigate—or foster—mass crime.

AUTHOR BIOGRAPHY
Wolfgang Seibel is Professor of Politics and Public Administration at the University of Konstanz and an Adjunct Professor at the Hertie School of Governance, Berlin.
REVIEWS
“Within the intensely repetitive literature on the Holocaust, Wolfgang Seibel's outstanding and thought-provoking book opens a new and promising path for interdisciplinary research in the field of Holcaust studies.”
—Marc Olivier Baruch, Director of Studies at the School for Advanced Studies in the Social Sciences (EHESS), Paris, and author of Sérvir l'État français: l'administration en France de 1940 à 1944

“[Seibel] provides a carefully balanced and morally sensitive assessment of wartime bargaining among German occupiers, French state collaborators, and bystanders such as the Catholic Church.”
—Michael R. Marrus, Chancellor Rose and Ray Wolfe Professor Emeritus of Holocaust Studies at the University of Toronto and co-author, with Robert O. Paxton, of Vichy France and the Jews

TABLE OF CONTENTS
Contents
List of Abbreviations
Preface to the U.S. Edition
Acknowledgments
Introduction: Power, Power Sharing, and Mass Crimes
Part I. Power-Sharing Occupation Administration and Persecution of the Jews
Chapter 1. German Occupation and the Persecution of the Jews in Western Europe, 1940–1944
Chapter 2. The German Occupation Administration in France after the Armistice of 22 June 1940
Chapter 3. The French Government and Administration and the “Collaboration”
Chapter 4. Establishing a Machinery of Persecution
Part II. The SS as Political Actor
Chapter 5. The SS in the Power Struggle with the Wehrmacht Administration, 1941/1942
Chapter 6. Sectoral Balance of Power and State Collaboration in the Persecution of the Jews: The Oberg-Bousquet Agreement of August 1942
Part III. Erosion of Power and the Emergence of Resistance
Chapter 7. The Protest of the Christian Churches and the Suspension of Eichmann’s Deportation Plan
Chapter 8. Another Attempt: The Project of a Denaturalization Law
Chapter 9. Italy’s Stance and Its Repercussions for the Persecution Measures against the Jews in France
Part IV. Strategic Occupation Policy and the “Final Solution to the Jewish Question”
Chapter 10. Safeguarding the Collaboration at the Expense of the “Final Solution”
Chapter 11. The Failure of the Denaturalization Law
Chapter 12. “Wild” Persecution of Jews
Conclusion: Negotiated Mass Crime and the Power of Morality
Short Biographies of the Key Actors
Notes
References
Index
REQUEST ACCESSIBLE FILE