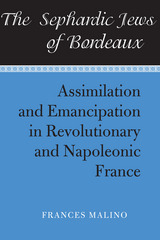 This book focuses on a small community of French Jews, the first in Europe to encounter the requirements of an emerging nation-state and to be recognized by that state as full and equal citizens. The Sephardim of Bordeaux were typical of neither the majority of the Jews of France nor those of Western Europe. They had entered France as Catholics; only after more than a century of public adherence to Catholicism was their community officially recognized as Jewish. Nevertheless, their assimilation and conformity to the standards of French society as well as their commitment to a Judaism fashioned as much by contemporary political and economic concerns as by tradi­tion reveal a legacy bequeathed to French Jewry and an important model for the development of the modern Jew.


“Malino writes . . . in such a fashion that the whole transit of Jews to modernity is illumined.”
—Christian Century
— -


“Malino’s book is valuable to students of both the early state and Jewish history.”
—American Historical Review
— -