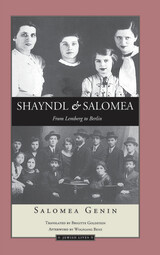 Shayndl and Salomea: From Lemberg to Berlin
by Salomea Genin
translated by Brigitte Goldstein
afterword by Wolfgang Benz

At the age of fifty and faced with severe depression, Salomea Genin began to write about her family's history. From stories both told and untold, Genin recreates the lives of the Zwerling family in the Jewish quarter of Lvov: Shulim, her strict and deeply religious grandfather; his patient but tired wife Dvoire; and his beautiful, rebellious daughter Shayndl, who marries a dreamer against her father's wishes and without his blessing, and who will later become Salomea Genin's mother.

Genin's richly detailed portrait shows the effects of a family's struggles--personal, religious, social, and for their very survival--against the shadow of the Nazi rise to power.
AUTHOR BIOGRAPHY
At the age of fifty and faced with severe depression, Salomea Genin began to write about her family's history.
REQUEST ACCESSIBLE FILE