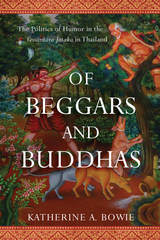 In the Buddha's penultimate incarnation, he appears as the Prince Vessantara. Perfecting the virtue of generosity, he gives away all his possessions, and even hands over his two children to the beggar Jujaka. This story was once better known across Theravada Buddhist Southeast Asia than the life of the Buddha himself. In Thailand, regional retellings have included humor and sly antiroyalist themes, despite efforts by the Bangkok monarchy to suppress them. Focusing on Jujaka, Katherine A. Bowie traces variations of this famous story, noting changes from its historical emphasis on generosity in feudal society to new emphases on prosperity and tourism under capitalism.
AUTHOR BIOGRAPHY
Katherine A. Bowie is the Vilas Distinguished Achievement Professor of Anthropology at the University of Wisconsin–Madison. She is the author of Rituals of National Loyalty: An Anthropology of the State and the Village Scout Movement in Thailand.
REVIEWS
"Provides historical justification for a new reading of the Vessantara Jataka and offers delightful ethnographic descriptions of its varied performance in several regions of Thailand. An excellent addition to Thai studies and to the understudied field of Southeast Asian literature."—Justin McDaniel, author of The Lovelorn Ghost and the Magic Monk: Practicing Buddhism in Modern Thailand


"A captivating and thought-provoking exploration of the Vessantara Jataka as it has taken shape and evolved across time and space in Thailand."—Reading Religion