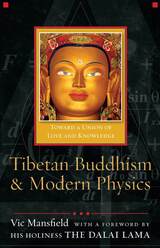 Tibetan Buddhism and Modern Physics: Toward a Union of Love and Knowledge addresses the complex issues of dialogue and collaboration between Buddhism and science, revealing connections and differences between the two. While assuming no technical background in Buddhism or physics, this book strongly responds to the Dalai Lama’s “heartfelt plea” for genuine collaboration between science and Buddhism. The Dalai Lama has written a foreword to the book and the Office of His Holiness will translate it into both Chinese and Tibetan.
In a clear and engaging way, this book shows how the principle of emptiness, the philosophic heart of Tibetan Buddhism, connects intimately to quantum nonlocality and other foundational features of quantum mechanics. Detailed connections between emptiness, modern relativity, and the nature of time are also explored. For Tibetan Buddhists, the profound interconnectedness implied by emptiness demands the practice of universal compassion. Because of the powerful connections between emptiness and modern physics, the book argues that the interconnected worldview of modern physics also encourages universal compassion. Along with these harmonies, the book explores a significant conflict between quantum mechanics and Tibetan Buddhism concerning the role of causality.
The book concludes with a response to the question: "How does this expedition through the heart of modern physics and Tibetan Buddhism—from quantum mechanics, relativity, and cosmology, to emptiness, compassion, and disintegratedness—apply to today's painfully polarized world?" Despite differences and questions raised, the book's central message is that there is a solid basis for uniting these worldviews. From this basis, the message of universal compassion can accompany the spread of the scientific worldview, stimulating compassionate action in the light of deep understanding—a true union of love and knowledge.
Tibetan Buddhism and Modern Physics will appeal to a broad audience that includes general readers and undergraduate and graduate students in science and religion courses.
AUTHOR BIOGRAPHY
Vic Mansfield iwas professor of physics and astronomy at Colgate University. Along with a wide range of science courses, he taught courses focusing on Tibetan Buddhism and Jungian psychology. He was an award-winning teacher who published scores of technical articles in science and several dozen interdisciplinary papers connecting physics to Tibetan Buddhism and depth psychology. For nearly four decades, he practiced and studied with spiritual leaders in the U.S., Europe, and India. He published two previous books: Synchronicity, Science, and Soul-Making (Open Court Publishing, 1995) and Head and Heart: A Personal Exploration of Science and the Sacred (Quest Books, 2002).
Vic Mansfield died peacefully on June 3, 2008, after a valiant two-year struggle with lymphoma.
TABLE OF CONTENTS