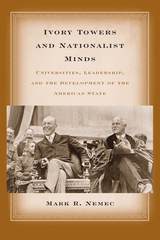 Ivory Towers and Nationalist Minds traces the rise of the great American universities through their formative years, 1862-1920, examining the role of these schools and their leadership in shaping American politics and public policy. Nemec's provocative study demonstrates that universities provided the intellectual and institutional apparatus needed to legitimize federal authority. His work challenges existing scholarship by documenting how the influx of academic expertise into the developing American state was fostered by campus entrepreneurs seeking to establish the social relevance of their institutions, rather than by the state itself.

"A wonderful, learned, and original work, full of present-day relevance. Essential reading for anyone interested in the history of higher education and its relation to professionalism and the growth of the modern state."
--Geoffrey Kabaservice, author of The Guardians: Kingman Brewster, His Circle, and the Rise of the Liberal Establishment

"Ivory Towers and Nationalist Minds contributes greatly to our understanding of the influence of the American university on public life, including the development of the modern American state. Nemec focuses on the universities working in concert to enhance their own influence and that of the state. This is not only a historical issue of interest-it has contemporary resonance. Institutions today compete intensely while cooperating regularly. And public universities like Michigan and California are expected, perhaps more than ever before, to contribute directly to the welfare of their states, especially in economic development."
--J. Douglas Toma, Associate Professor, Institute of Higher Education, University of Georgia

"Ivory Towers and Nationalist Minds fills an important void in the study of American political development and its relationship to the evolution of American higher education. Numerous historical case studies provide vivid evidence of how universities emerged as sources of national expertise and state-building at a critical juncture in our nation's history. Nemec demonstrates that such contributions were not historical inevitabilities, but the product of strategic actors seeking to simultaneously strengthen universities and serve a greater national purpose."
--Scott W. Allard, Brown University

Mark R. Nemec is a Vice President with Forrester Research in Cambridge, Massachusetts. He holds a BA from Yale, and both an MA in Education and a PhD in Political Science from the University of Michigan. He has served on the faculty of Davidson College and as a Senior Director of the Advisory Board Company in Washington, DC.
TABLE OF CONTENTS