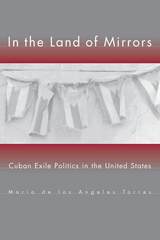 In the Land of Mirrors is a journey through the politics of Cuban exiles since the 1959 Cuban Revolution. It explores the development of Cuban exile politics and identity within a context of U.S. and Cuban realities, as well as within the broader inquiry of the changing nature of nation-states and its impact on the politics and identity of diaspora communities. Topics covered include: the origins of the post-revolution exile enclave of the 1960s; the evolution of the Cuban community over the 1960s; the pluralization of exile politics in the 1970s, particularly regarding the relationship with the island; the emergence of Cuban-American political action committees in the 1980s; post-Cold War developments; and the transition of Miami by the coming of age of a second generation of Cuban-Americans and the arrival of a new wave of exiles.
Interspersed with vignettes from the author's own experiences and political activism, In the Land of Mirrors explores the meanings and ramifications of exile, of belonging, and of seeing the self in the other. It will appeal to political scientists, Latin Americanists, and those studying the politics of exile.
María de los Angeles Torres was born in Cuba and came to the United States as a young child. She is Associate Professor of Political Science, DePaul University.
TABLE OF CONTENTS