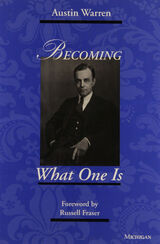 The late Austin Warren was one of the most distinguished literary scholars of the twentieth century, well known as a biographer, literary critic, and teacher. He retired from the University of Michigan English Department in 1968 after twenty years on the faculty. Warren's memoir ends at age forty, because, as he explains in the preface, the most interesting part of anyone's life is the formative years.

He begins with his childhood in Massachusetts and education at Wesleyan, Harvard, and Princeton, and ends with reflections on the problems of integrating his profession, teaching, with his vocation, writing. The journey in between is extraordinary, a re-creation of the scholar's search for identity, religion, wisdom, and a new vision of the role of a teacher.

Warren "forged his soul when others weren't looking," writes Russell Fraser in his foreword to the book. He grew up on a lonely New England farm, went to a school where he learned to hate even Shakespeare, and entered college without enthusiasm. But the history of his education, as is often the case, was one first of rescue by inspiring mentors, then of outgrowing those mentors, and finally of forging a vision of his own. By the 1930s he had shaken up classrooms by abandoning formal lectures and become an inspiration in his own right.

A singular personality who never stopped searching for meaningful spirituality and a wider intellectual world, Austin Warren was among the most important scholars of the twentieth century. His memoirs of "becoming" are an elegant and absorbing chronicle.