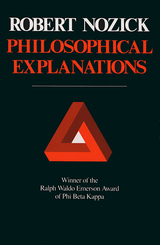 In this highly original work, Robert Nozick develops new views on philosophy’s central topics and weaves them into a unified philosophical perspective. It is many years since a major work in English has ranged so widely over philosophy’s fundamental concerns: the identity of the self, knowledge and skepticism, free will, the question of why there is something rather than nothing, the foundations of ethics, the meaning of life.

Writing in a distinctive and personal philosophical voice, Mr. Nozick presents a new mode of philosophizing. In place of the usual semi-coercive philosophical goals of proof, of forcing people to accept conclusions, this book seeks philosophical explanations and understanding, and thereby stays truer to the original motivations for being interested in philosophy.

Combining new concepts, daring hypotheses, rigorous reasoning, and playful exploration, the book exemplifies how philosophy can be part of the humanities.