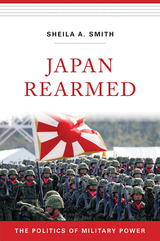 Modern Japan is not only responding to threats from North Korea and China but is also reevaluating its dependence on the United States, Sheila Smith shows. No longer convinced they can rely on Americans to defend their country, Tokyo’s political leaders are now confronting the possibility that they may need to prepare the nation’s military for war.
TABLE OF CONTENTS
Cover
Title Page
Copyright
Dedication
Contents
Abbreviations
Introduction
1. Japan in the Cold War
2. The Self-Defense Force Abroad
3. Mobilizing the Military
4. The Constitution Revisited
5. Relying on Borrowed Power
Conclusion
Notes
Further Reading
Acknowledgments
Index