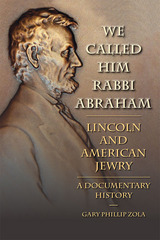 Over the course of American history, Jews have held many American leaders in high esteem, but they maintain a unique emotional bond with Abraham Lincoln. From the time of his presidency to the present day, American Jews have persistently viewed Lincoln as one of their own, casting him as a Jewish sojourner and, in certain respects, a Jewish role model. This pioneering compendium— The first volume of annotated documents to focus on the history of Lincoln’s image, influence, and reputation among American Jews— considers how Lincoln acquired his exceptional status and how, over the past century and a half, this fascinating relationship has evolved.

Organized into twelve chronological and thematic chapters, these little-known primary source documents—many never before published and some translated into English for the first time—consist of newspaper clippings, journal articles, letters, poems, and sermons, and provide insight into a wide variety of issues relating to Lincoln’s Jewish connection. Topics include Lincoln’s early encounters with Central European Jewish immigrants living in the Old Northwest; Lincoln’s Jewish political allies; his encounters with Jews and the Jewish community as President; Lincoln’s response to the Jewish chaplain controversy; General U. S. Grant’s General Orders No. 11 expelling “Jews, as a class” from the Military Department of Tennessee; the question of amending the U.S. Constitution to legislate the country’s so-called Christian national character; and Jewish eulogies after Lincoln’s assassination. Other chapters consider the crisis of conscience that arose when President Andrew Johnson proclaimed a national day of mourning for Lincoln on the festival of Shavuot (the Feast of Weeks), a day when Jewish law enjoins Jews to rejoice and not to mourn; Lincoln’s Jewish detractors contrasted to his boosters; how American Jews have intentionally “Judaized” Lincoln ever since his death; the leading role that American Jews have played in in crafting Lincoln’s image and in preserving his memory for the American nation; American Jewish reflections on the question “What Would Lincoln Do?”; and how Lincoln, for America’s Jewish citizenry, became the avatar of America’s highest moral aspirations.

With thoughtful chapter introductions that provide readers with a context for the annotated documents that follow, this volume provides a fascinating chronicle of American Jewry’s unfolding historical encounter with the life and symbolic image of Abraham Lincoln, shedding light on how the cultural interchange between American ideals and Jewish traditions influences the dynamics of the American Jewish experience.