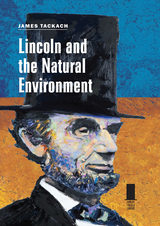 In this groundbreaking environmental biography of Abraham Lincoln, James Tackach maps Lincoln’s lifelong relationship with the natural world from his birth and boyhood on Midwestern farms through his political career and presidency dealing with the effects of the Industrial Revolution and the Civil War.

Lincoln was born in a generation that grew up on farms but began to move to cities as industrialization transformed the American economy. Turning away from the outdoor, manual labor of his youth, he chose careers in law and politics but always found solace outside first on the prairies of Illinois and, later, at the woodsy presidential retreat. As Tackach shows, Lincoln relied on examples and metaphors from the natural world in his speeches and writings.

As a member of the Whig Party Lincoln endorsed the Industrial Revolution, which transformed the nation’s economy and its physical, social, and cultural landscapes, and advocated for the creation of railroads, canals, roads, and bridges to facilitate growth and the distribution of products. But he and his party failed to take steps to protect the natural environment. Surveying the destruction of the environment in the mid-nineteenth century, Tackach outlines how some American writers, the first voices for protection and conservation, began to call attention to the results of deforestation and the overhunting of animals during Lincoln’s lifetime.

As commander in chief during the Civil War, Lincoln approved a strategy that included significant infrastructure and environmental damage. In the South, where most of the battles occurred, Union troops burned cities and towns and destroyed plantations, farms, and natural landscapes. Tackach argues that, midway through his presidency, Lincoln seemed to sense that postwar Reconstruction would have to be spiritual, political, economic, and environmental in order to heal the nation’s wounds. He signed the Morrill Act, creating the land-grant colleges, and the environmentally progressive Yosemite Grant Act, which preserved thousands of acres of forest in California.

The first scholar to thoroughly investigate Lincoln’s lifelong relationship with the natural environment, Tackach paints Lincoln’s personal and professional life against the backdrop of nineteenth-century American environmental history, issues, and writers, providing insights into contemporary environmental issues.
AUTHOR BIOGRAPHY
James Tackach is a professor of English at Roger Williams University and the president of the Lincoln Group of Boston. He is the author of Lincoln’s Moral Vision: The Second Inaugural Address and numerous articles on Abraham Lincoln.
TABLE OF CONTENTS
Cover
Title
Copyright
Contents
List of Illustrations
Introduction
1. I Was Raised to Farm Work
2. Internal Improvements
3. My Childhood-Home I See Again
4. This Mighty Scourge of War
5. The Fruitful Source of Advantage to All Our People
Epilogue
Acknowledgments
Notes
Bibliography
Index
About the Author
Other Titles in the Series
Back Cover