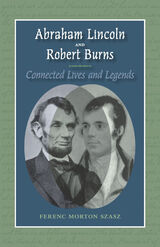 Today the images of Robert Burns and Abraham Lincoln are recognized worldwide, yet few are aware of the connection between the two. In Abraham Lincoln and Robert Burns: Connected Lives and Legends, author Ferenc Morton Szasz reveals how famed Scots poet Robert Burns—and Scotland in general—influenced the life and thought of one of the most beloved and important U.S. presidents and how the legends of the two men became intertwined after their deaths. This is the first extensive work to link the influence, philosophy, and artistry of these two larger-than-life figures.

Lacking a major national poet of their own in the early nineteenth century, Americans in the fledgling frontier country ardently adopted the poignant verses and songs of Scotland’s Robert Burns. Lincoln, too, was fascinated by Scotland’s favorite son and enthusiastically quoted the Scottish bard from his teenage years to the end of his life. Szasz explores the ways in which Burns’s portrayal of the foibles of human nature, his scorn for religious hypocrisy, his plea for nonjudgmental tolerance, and his commitment to social equality helped shape Lincoln’s own philosophy of life. The volume also traces how Burns’s lyrics helped Lincoln develop his own powerful sense of oratorical rhythm, from his casual anecdotal stories to his major state addresses.

Abraham Lincoln and Robert Burns connects the poor-farm-boy upbringings, the quasi-deistic religious views, the shared senses of destiny, the extraordinary gifts for words, and the quests for social equality of two respected and beloved world figures. This book is enhanced by twelve illustrations and two appendixes, which include Burns poems Lincoln particularly admired and Lincoln writings especially admired in Scotland.

Ferenc Morton Szasz was Regents’ Professor of History at the University of New Mexico and on appointment as Honorary Research Fellow in the School of Divinity, History, and Philosophy at the University of Aberdeen, Scotland. He wrote or edited eleven books, including Scots in the North American West, 1790–1917; The Day the Sun Rose Twice: The Story of the Trinity Site Nuclear Explosion, July 16, 1945; The Divided Mind of Protestant America, 1880–1930; and, with Margaret Connell Szasz, Lincoln and Religion. For a commemoration of his life see Ferenc Morton Szasz: A Celebration and Selected Writings, edited by Mark T. Banker.