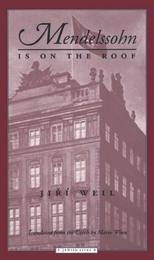 Mendelssohn Is on the Roof
by Jiri Weil
translated by Marie Winn
Northwestern University Press, 1998
Paper: 978-0-8101-1686-3
Julius Schlesinger, aspiring SS officer, has received orders to remove from the roof of Prague's concert hall the statue of the Jewish composer Felix Mendelssohn. But which of the figures adorning the roof is the Jew? Remembering his course on racial science, Schlesinger instructs his men to pull down the statue with the biggest nose. Only as the statue they have carefully chosen begins to topple does he recognize that it is not Mendelssohn; it is Richard Wagner.

Thus begins a story of disarming simplicity that traces the transformation of ordinary lives in Nazi-occupied Prague. Death abetted by the petty malevolence of Nazi functionaries wins all the battles but ultimately loses the war, defeated by the fragile flowering of courage and defiance.

Jiří Weil (6 August 1900, Praskolesy - 13 December 1959, Prague) was a Czech writer. He was Jewish. His noted works include the two novels Life with a Star (Život s hvězdou), and Mendelssohn Is on the Roof (Na střeše je Mendelssohn), as well as many short stories, and other novels.