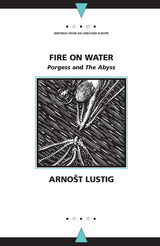 It occurred to me why I was able to forgive the Italians, but never the Germans. Was it because the Italians never slept on mattresses stuffed with the hair of Luster Leibling or Weltfeind Flusser?

In this pair of short novels, Arnošt Lustig continues his lifelong project of creating a universe-at once concrete and dreamlike-to examine the horrors of the Holocaust and the impossible burden of living as a survivor.
The Abyss is the fragmented memories of David Wiesenthal, aged twenty, tortured by what he has witnessed and by the knowledge that luck-not skill, not courage, certainly not goodness-separated the survivors from the doomed. He seeks solace remembering the women he's loved or desired, even the one who represents his death.
In Porgess, the narrator recounts the life of the title character, "the most handsome boy in Jewish Prague" who was paralyzed on the last day of World War II. The two discuss their mutual fascinations-women, jazz, the significance of numbers-in sometimes bitter, sometimes sardonic voices, but always with the specters of the dead and the guilt of survival close at hand.
AUTHOR BIOGRAPHY
Arnošt Lustig was born in Czechoslovakia in 1926. After internment in Theresienstadt, Buchenwald, and Auschwitz, he escaped from a train of prisoners bound for Dachau. He returned to Prague to fight for the Czech resistance in 1945 and went into exile following the Soviet invasion of Czechoslovakia in 1968. Lustig now lives in the United States, where he teaches writing, literature, and the history of film at American University in Washington D.C.
REVIEWS

"One is grateful for Mr. Lustig's quiet prose and for the fiction that we are reading fiction." -New Yorker

"[Lustig] is not only an eyewitness but also a skillful, gifted writer. . . . With age, exile and distance, he appears to have outgrown mere brilliance and learned to deal with the past in his own way." -Ernst Pawel, New York Times Book Review

"Arnošt Lustig is one of the leading contemporary Czech fiction writers, and certainly the most important Jewish writer of Bohemia to have survived the Holocaust." -Josef Škvorecký