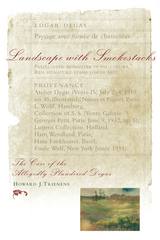 The dispute over Edgar Degas’s Landscape with Smokestacks was featured in newspapers and on television. But because the suit was settled before trial, the story behind the headlines was never publicly presented. Howard J. Trienens, a lawyer for the defendant collector, traces the landscape’s travels from its prewar home to its current location in the Art Institute of Chicago, laying out the mystery surrounding the work and demonstrating the legal complexities that plague Holocaust restitution cases, yet are seldom examined in depth by the media.
AUTHOR BIOGRAPHY
Howard J. Trienens served as a law clerk to Supreme Court justice Frederick M. Vinson from 1950 to 1952 before permanently joining the law firm of Sidley & Austin, where he became a partner in 1956. He has been a senior vice president and the general counsel for AT&T and a director of R. R. Donnelley & Sons and G. D. Searle and is currently a member of the Northwestern University Board of Trustees. He lives in Glencoe, Illinois.
TABLE OF CONTENTS

Chapter Five
What Happened to the Landscape?