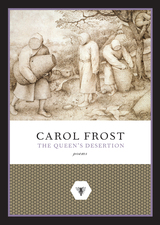 In her tenth collection of poems, Carol Frost describes a journey through loss. How can one regain equilibrium in the face of absences such as dementia and death? We have to keep moving, even while realizing that the loss of mind and body is the natural conclusion. At the beginning of the first poem Frost invokes the image of an empty or abandoned beehive:

Pretty to think of the mind at its end
as a metaphysician beekeeping
after the leaves have fallen at autumn's end.

The bee metaphor is handled brilliantly and subtly throughout the collection as a reminder of how often our constant activity, whether it is mental or physical, is taken for granted.

Frost continues her investigation of the mortal plight by entering into a Dantesque descent into the ebb and flow of the seascape. Body consumes body over and over again as fish are caught and killed and the poet observes the flora and fauna as they partake in the darker cycles of nature. A long narrative poem about the Spanish explorer de Baca and his harrowing travels from southern Florida to Mexico powerfully reinforces the certainty of consumption and loss as it comments on the colonizing of the new world. In the final section, Frost returns once more to the need for movement and summons the Greek god Pan, who dances a rite of acceptance through a metaphysical landscape on the verge of seasonal change--the bees are not dead, the dark woods are filled with music.
AUTHOR BIOGRAPHY
Carol Frost divides her time between Cedar Key, Florida, and upstate New York. Her poems have appeared in the Pushcart Prize anthology three different years, and she is a poetry editor for Pushcart Prize Anthology XXVII and The Best of Pushcart Prize Poetry: Selections from the First Thirty Years. She is also the director and founder of the Catskill Poetry Workshop, and is the recipient of two fellowships from the National Endowment for the Arts. Her books include I Will Say Beauty (2003), Love and Scorn (2000), Venus and Don Juan (1996), and Pure (1994), all published by TriQuarterly Books/Northwestern University Press.
TABLE OF CONTENTS