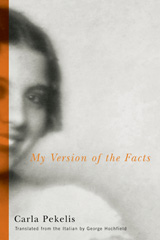 "What did it mean to be a Jewish child in Italy at the beginning of the century?" Carla Pekelis asks herself. "As a matter of fact, nothing, absolutely nothing!" But shortly, as fascism began its march through her homeland and racial laws slowly constricted her world, Carla would learn that being a Jew in Italy might indeed have a profound meaning and dire consequences. Her recollections form an absorbing, nuanced portrait of a life transformed, and a world transfigured, by the relentless currents of history.
AUTHOR BIOGRAPHY
Carla Pekelis (1907-1985) was born Carla Coen in Rome. In 1931 she married Alexander Pekelis, an Odessa Jew who had escaped from Russia in 1917 and had become a lawyer and professor of law in Italy and then, in the United States, a leading figure in the Zionist Labor Party. In 1946, Carla was left a widow and from then on supported her large family singlehandedly, teaching Italian language and literature at the university level. In addition to the two journals that comprise My Version of the Facts, she was the author of short stories and writings on linguistics.

George Hochfield is the translator of Claudio Piersanti's Luisa and the Silence and was nominated for the PEN West Translation Prize for Giampiero Carocci's Officers Camp, both published by the Marlboro Press/Northwestern. He lives in Berkeley, California.
TABLE OF CONTENTS