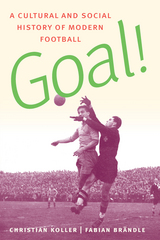 Goal! covers the history of the beautiful game from its origins in English public schools in the early 19th century to its current role as a crucial element of a globalized entertainment industry. The authors explain how football transformed from a sport at elite boarding schools in England to become a pastime popular with the working classes, enabling factories such as the Thames Iron Works and the Woolwich Arsenal to give birth to the teams that would become the Premier League mainstays known as West Ham United and Arsenal. They also explore how the age of amateur soccer ended and, with the advent of professionalism, how football became a sport dominated by big clubs with big money and with an international audience.
TABLE OF CONTENTS
Title Page
Copyright Page
Contents
Preface to the English Edition
1. Introduction
2. A Game for the Elite
3. The People's Game
4. Football and Money
5. Football and Emotion
6. Football and the Nation
7. Football and Class Struggle
8. Football and Dictatorship
9. Football and War
10. Football and Gender
11. Conclusion
Bibliography
Index