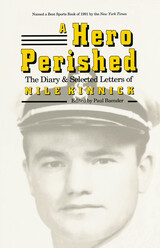 A Hero Perished tells Nile Kinnick's story. This grandson of an Iowa governor, the son of parents who disciplined him to strive for his measure of greatness, became a Heisman Trophy winner and national celebrity through a combination of talent and circumstance. Following his college successes, Kinnick began legal study to prepare for a political career, but with the approach of war he entered the Navy Air Corps to refashion himself as a fighter pilot. Assigned to the carrier USS Lexington on its premier cruise, he took off in a defective plane—and his death shocked a nation grown almost used to tragic loss.

For the first time, Kinnick tells his own tale through his engaging letters—all but one previously unpublished—and his diary, printed in its entirety for the first time. The result is a human, intimate look at the true person behind the myth, revealing both his foibles and his essential principles. A Hero Perished also includes a definitive text of Kinnick's moving Heisman Award acceptance speech and his impassioned commencement supper address, calling on the new Iowa graduates to achieve moral courage in a time of depression and war.

An illuminating comment on a time and attitude that have passed, A Hero Perished is of and about a football player, but it is not a football book—it is far more. This volume displays Kinnick—who was, despite his great gifts and achievements, a vulnerable and decent young man—in a time of great change and peril when a phase of our culture was passing away.