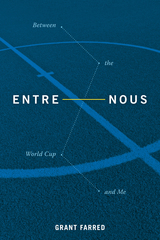 In Entre Nous Grant Farred examines the careers of international football stars Lionel Messi and Luis Suarez, along with his own experience playing for an amateur township team in apartheid South Africa, to theorize the relationship between sports and the intertwined experiences of relation, separation, and belonging. Drawing on Jean-Luc Nancy's concept of relation and Heideggerian ontology, Farred outlines how various relationships—the significantly different relationships Messi has with his club team FC Barcelona and the Argentine national team; Farred's shifting modes of relation as he moved between his South African team and his Princeton graduate student team; and Suarez's deep bond with Uruguay's national team coach Oscar Tabarez—demonstrate the ways the politics of relation both exist within and transcend sports. Farred demonstrates that approaching sports philosophically offers particularly insightful means of understanding the nature of being in the world, thereby opening new paths for exploring how the self is constituted in its relation to the other.
AUTHOR BIOGRAPHY
Grant Farred is the author of a trilogy of works on sport and the event, of which Entre Nous is the concluding volume. The other two are In Motion, At Rest: The Event of the Athletic Body and The Burden of Over-representation: Race, Sport, and Philosophy.
REVIEWS
"[Farred] draws examples from the world of sport to examine the state of being in relation, most notably international soccer superstars Lionel Messi and Luis Suarez, considering their relations to fans, teammates, and coaches. He also reflexively draws on his own sporting experiences in the US and South Africa, considering his relations to fans as experienced throughout his life. The result is a comprehensive philosophical meditation on sport, showing how this can be applied to more fully understand how a self is constituted and reconstituted in relation to others."


Preface  ix
Acknowledgments  xxv
Introduction. Entre-Nous: Between the World and Me  1
1. A Condemned Man: Between the Nation and the Autonomista  29
Interlude. "Nog Lansur!"  97
2. The Shame of Loving the Condemned: The Philosophy of Óscar Washington Tabárez  163
Postscript  219
Notes  225
Bibliography  251
Index  253