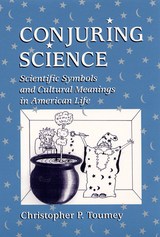 What are the implications for Americans when actors who play doctors on television endorse medical products, or when an entire town in the Midwest prepares for an earthquake based on the specious advice of a zoologist? These are just two of the many questions Christopher Toumey asks in his investigation of the role of science in American culture. Toumey focuses on the ways in which the symbols of science are employed to signify scientific authority in a variety of cases, from the selling of medical products to the making of public policy about AIDS/HIV––a practice he calls "conjuring" science. It is this "conjuring" of the images and symbols of scientific authority that troubles Toumey and leads him to reflect on the history of public understanding and perceptions of science in the United States. He argues that while most Americans invest a great deal of authority in science, there is a vacuum of understanding about scientific knowledge. This gap between belief and understanding greatly influences public policy decisions and democratic processes.

Toumey argues that instead of comprehending scientific knowledge, methods, or standards, most Americans know science only in terms of symbols that stand for science and that stand between people and scientific understanding. He breaks this paradox down into three questions. First, what are the historical conditions that have caused the culture of science to be so estranged from other parts of American culture? Second, how does science fit into American democratic culture today? And third, if the symbols of science are being used to endorse or legitimize certain values and meanings, but not the values and meanings of science, then to what do they refer?

In witty, readable prose, Toumey investigates these questions by presenting five episodes of science in American life: the fluoridation controversies; the 1986 California referendum on AIDS/HIV policy; the cold fusion controversy; the anti-evolution of creationism; and the mad- scientist stories of fiction and film.