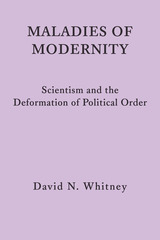 Maladies of Modernity: Scientism and the Deformation of Political Order
by David N. Whitney
St. Augustine's Press, 2014
Paper: 978-1-58731-489-6
This work explores the complex relationship between science and politics. More specifically, it focuses on the problem of scientism. Scientism is a deformation of science, which unnecessarily restricts the scope of scientific inquiry by placing a dogmatic faith in the method of the natural sciences. Its adherents call for nothing less than a complete transformation of society. Science becomes the idol that can magically cure the perpetual maladies of modern society and of human nature itself. Whitney demonstrates that scientism is intellectually impoverishing and politically dangerous. Whitney surveys the development of scientism from early modernity to the present day, beginning with Francis Bacon, arguing that Bacon stands as the founder, not only of the experimental method, but also of scientism. This is most evident in his presentation of a scientific utopia in New Atlantis. After briefly noting the impact of Isaac Newton and the French Encylopedists, Whitney then moves on to the other great representative figure of scientism: Auguste Comte, who demonstrates the religious fervor that accompanies the scientistic attitude. Continuing on the path set forth by Bacon, Comte argues for a reorganization of society based on the precepts of positive science. The eugenics movements in 20th-century America and Germany is next, and the author argues that they reflect the new worldview that had emerged from Darwin’s evolutionary theory; a theory partially based on scientistic principles. The solution to scientism, Whitney advances, lies in a new (or revised) science of politics; the foundation of which is based on the Classical sources that were either discredited or banned outright by the proposals of Bacon and Comte. He concludes the work with contemporary examples of scientism, including the climate change debates, genetic engineering, and the New Atheism movement.

“Chief among the spiritually blighting tendencies of the age is materialist reductionism parading as scientific orthodoxy. David Whitney powerfully explores this movement and habit of mind as it takes its rise in the form of scientism, especially from Sir Francis Bacon’s NEW ATLANTIS in the 17th century and finds full fruition in the positivist teachings of August Comte in the 19th century—a preamble to the behavioralist dogmas of our own time. The openness to the facts of experience characteristic of all science as a search for the truth of reality in all its dimensions and diversity is thereby effectively abandoned in favor of an unrelenting insistence on a restrictive methodology ostensibly grounded in phenomenal reality that is perversely made the touchstone of all valid inquiry. The consequences are philosophically as well as politically disastrous, as Whitney brilliantly demonstrates in this path-breaking study.”

"David Whitney’s excellent critique of what he calls scientism, a dogmatic application of the methods of natural science to social science, provides a high-brow diagnosis of the modern maladies that result from the “rhetorical power of science.”