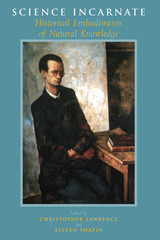 Ever since Greek antiquity "disembodied knowledge" has often been taken as synonymous with "objective truth." Yet we also have very specific mental images of the kinds of bodies that house great minds—the ascetic philosopher versus the hearty surgeon, for example. Does truth have anything to do with the belly? What difference does it make to the pursuit of knowledge whether Einstein rode a bicycle, Russell was randy, or Darwin flatulent?

Bringing body and knowledge into such intimate contact is occasionally seen as funny, sometimes as enraging, and more often just as pointless. Vividly written and well illustrated, Science Incarnate offers concrete historical answers to such skeptical questions about the relationships between body, mind, and knowledge.

Focusing on the seventeenth century to the present, Science Incarnate explores how intellectuals sought to establish the value and authority of their ideas through public displays of their private ways of life. Patterns of eating, sleeping, exercising, being ill, and having (or avoiding) sex, as well as the marks of gender and bodily form, were proof of the presence or absence of intellectual virtue, integrity, skill, and authority. Intellectuals examined in detail include René Descartes, Isaac Newton, Charles Darwin, and Ada Lovelace.

Science Incarnate is at once very funny and deeply serious, addressing issues of crucial importance to present-day discussions about the nature of knowledge and how it is produced. It incorporates much that will interest cultural and social historians, historians of science and medicine, philosophers, sociologists, and anthropologists.
TABLE OF CONTENTS