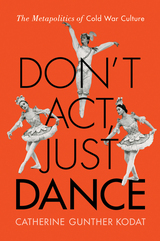 At some point in their career, nearly all the dancers who worked with George Balanchine were told “don’t act, dear; just dance.” The dancers understood this as a warning against melodramatic over-interpretation and an assurance that they had all the tools they needed to do justice to the steps—but its implication that to dance is already to act in a manner both complete and sufficient resonates beyond stage and studio.
Drawing on fresh archival material, Don’t Act, Just Dance places dance at the center of the story of the relationship between Cold War art and politics. Catherine Gunther Kodat takes Balanchine’s catch phrase as an invitation to explore the politics of Cold War culture—in particular, to examine the assumptions underlying the role of “apolitical” modernism in U.S. cultural diplomacy. Through close, theoretically informed readings of selected important works—Marianne Moore’s “Combat Cultural,” dances by George Balanchine, Merce Cunningham, and Yuri Grigorovich, Stanley Kubrick’s Spartacus, and John Adams’s Nixon in China—Kodat questions several commonly-held beliefs about the purpose and meaning of modernist cultural productions during the Cold War.
Rather than read the dance through a received understanding of Cold War culture, Don’t Act, Just Dance reads Cold War culture through the dance, and in doing so establishes a new understanding of the politics of modernism in the arts of the period.
AUTHOR BIOGRAPHY
CATHERINE GUNTHER KODAT is the dean of the Division of Liberal Arts and a professor of humanities at the University of the Arts in Philadelphia.

REVIEWS
"This book is a tour de force, a grand jeté, a series of sustained arabesques introducing a new and exciting way of thinking through the relation between aesthetic and political forms in twentieth-century American culture."
— Virginia Jackson, University of California-Irvine

"An important manifesto for dance as a subject of serious scholarly attention in academic disciplines beyond dance history and dance studies … the book's final case studies are brilliant comparative meditations on the complex, multilayered relationship between Cold War art and politics."
— Dance Chronicle