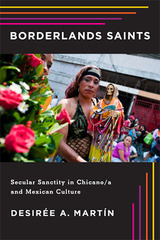 In Borderlands Saints, Desirée A. Martín examines the rise and fall of popular saints and saint-like figures in the borderlands of the United States and Mexico. Focusing specifically on Teresa Urrea (La Santa de Cabora), Pancho Villa, César Chávez, Subcomandante Marcos, and Santa Muerte, she traces the intersections of these figures, their devotees, artistic representations, and dominant institutions with an eye for the ways in which such unofficial saints mirror traditional spiritual practices and serve specific cultural needs.

Popular spirituality of this kind engages the use and exchange of relics, faith healing, pilgrimages, and spirit possession, exemplifying the contradictions between high and popular culture, human and divine, and secular and sacred. Martín focuses upon a wide range of Mexican and Chicano/a cultural works drawn from the nineteenth century to the present, covering such diverse genres as the novel, the communiqué, drama, the essay or crónica, film, and contemporary digital media. She argues that spiritual practice is often represented as narrative, while narrative—whether literary, historical, visual, or oral—may modify or even function as devotional practice.

DESIRÉE A. MARTÍN is an assistant professor of English at the University of California, Davis.

"Through Martín’s incisive critical textual analysis we come to see the borderlands—and the exchange there between devotees and saints—as an important site for the performance of secular sanctity. Borderlands Saints is an invaluable contribution to border studies."
— Laura G. Gutiérrez, author of Performing Mexicanidad: Vendidas y Cabareteras on the Transnational Stage