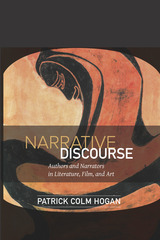 In Narrative Discourse: Authors and Narrators in Literature, Film, and Art, Patrick Colm Hogan reconsiders fundamental issues of authorship and narration in light of recent research in cognitive and affective science. He begins with a detailed overview of the components of narrative discourse, both introducing and reworking key principles. Based on recent studies treating the complexity of human cognition, Hogan presents a new account of implied authorship that solves some notorious problems with that concept.

In subsequent chapters Hogan takes the view that implied authorship is both less unified and more unified than is widely recognized. In connection with this notion, he examines how we can make interpretive sense of the inconsistencies of implied authors within works and the continuities of implied authors across works. Turning to narrators, he considers some general principles of readers’ judgments about reliability, emphasizing the emotional element of trust. Following chapters take up the operation of complex forms of narration, including parallel narration, embedded narration, and collective voicing (“we” narration). In the afterword, Hogan sketches some subtleties at the other end of narrative communication, considering implied readers and narratees. In order to give greater scope to the analyses, Hogan develops case studies from painting and film as well as literature, treating art by Rabindranath Tagore; films by David Lynch, Bimal Roy, and Kabir Khan; and literary works by Mirabai, Harriet Beecher Stowe, Ernest Hemingway, William Faulkner, Margaret Atwood, Ngugi wa Thiong’o, and Joseph Diescho.
AUTHOR BIOGRAPHY
Patrick Colm Hogan is a professor in the English Department and the programs in comparative literature and cultural studies, India studies, and cognitive science at the University of Connecticut.
REVIEWS
“Narrative Discourse: Authors and Narrators in Literature, Film, and Art is a remarkably transformative contribution to narrative theory and an important account of the nature and purpose of literary criticism more generally. It is full of useful distinctions and compelling readings of major texts.” —Jesse Matz, associate professor of English, Kenyon College