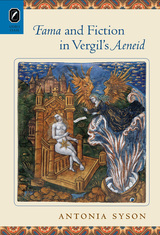 What does it mean to “know” what a work of fiction tells us? In Vergil’s Aeneid, the promise and uncertainty of fama convey this challenge. Expansive and flexible, the Latin word fama can mean “fame,” long-lasting “tradition,” and useful “news,” but also ephemeral “rumor” and disruptive “scandal.” Fama is personified as a horrifying winged goddess who reports the truth while keeping an equally tight grip on what’s distorted or made up. Fama reflects the ways talk—or epic song—may merge past and present, human and divine, things remembered and things imagined.

Most importantly, fama marks the epic’s power to bring its story world into our own. The cognitive dynamics of metaphor share in this power, blending the Aeneid’s poetic authority with the imagined force of the gods. Characters and readers are encouraged—even impelled— to seek divine order amidst unsettling words and visions by linking new experiences with existing knowledge. Transformative moments of recognition set the perceptual stage both for the gods’ commands and for the epic’s persuasive efficacy, for pietas (remembrance of ritual and social obligations) and furor (madness).

Antonia Syson’s sensitive close readings offer fresh insights into questions of fictive knowledge and collective memory in the Aeneid. These perspectives invite readers to reconsider some of the epistemological premises underlying inquiry into ancient cultures. Drawing comparisons with the nineteenth-century English novel, Syson highlights continuities between two narrative genres whose cultural contributions and rhetorical claims have often seemed sharply opposed.
AUTHOR BIOGRAPHY
Antonia Syson (1973–2018) was associate professor of Classics, School of Languages & Cultures, at Purdue University.
REVIEWS
“This is a wonderful book from which I have learned a great deal. It will be influential not only for future work on the Aeneid, but also for scholarship on the Latin epic tradition overall. The author handles complicated theoretical material with ease and sophistication.” —Martha Malamud, professor of classics, SUNY Buffalo


" S[yson]’s work is a welcome addition to scholarship on fama, pietas and furor in the Aeneid. Her book is well researched and includes a plethora of subtle and fascinating readings of Virgil’s epic." —
The Classical Review (2015)