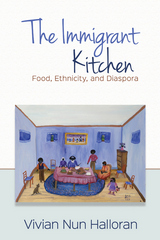 In The Immigrant Kitchen: Food, Ethnicity, and Diaspora, Vivian Nun Halloran examines food memoirs by immigrants and their descendants and reveals how their treatment of food deeply embeds concerns about immigrant identity in the United States. Halloran argues that by offering a glimpse into the authors’ domestic lives through discussions of homemade food, these memoirs demystify the processes of immigration, assimilation, acculturation, and expatriation—ultimately examining what it means to live as naturalized citizens of the United States. Having grown up hearing about their parents’ often fraught experiences of immigration, these authors examine the emotional toll these stories took and how such stories continue to affect their view of themselves as Americans. Halloran covers a wide swathe of immigrant food memoirs, moving seamlessly between works by authors such as Austin Clarke, Madhur Jaffrey, Kim Sunée, Diana Abu-Jaber, Eduardo Machado, Colette Rossant, Maya Angelou, and Jonathan Safran Foer.

The Immigrant Kitchen describes how these memoirs function as a complex and engaging mass media genre that caters to multiple reading constituencies. Specifically, they entertain readers with personal anecdotes and recollections, teach new culinary skills through recipes, share insight into different cultural mores through ethnographic and reportorial discussions of life in other countries, and attest to the impact that an individual’s legal immigration into the United States continues to have down through the generations of his or her American-born families.
AUTHOR BIOGRAPHY
Vivian Nun Halloran is Associate Professor of English and American Studies at Indiana University Bloomington.
REVIEWS
“The Immigrant Kitchen brings together texts from writers coming out of different immigrant traditions, and its movement through the topics ranging from immigration to assimilation to expatriation felt perfect to me. Both literary scholars who work in transnational and postcolonial studies and food studies scholars who work on related topics in the humanities will want to read this book. Scholars affiliated with programs in women’s studies, ethnic studies, and American studies, as well as historians of immigration, will also find The Immigrant Kitchen necessary reading.” —Doris Witt, University of Iowa