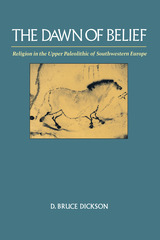 Hunter-gatherers of the Upper Paleolithic period of the late Pleistocene epoch in western Europe left a legacy of cave paintings and material remains that have long fascinated modern man. This book draws on theories derived from cultural anthropology and cognitive archaeology to propose a reconstruction of the religious life of those people based on the patterning and provenience of their artifacts.

Based on the premises that all members of Homo sapiens sapiens share basically similar psychological processes and capabilities and that human culture is patterned, the author uses ethnographic analogy, inference from material patterns, and formal analysis to find in prehistoric imagery clues to the cosmology that lay behind them. The resulting book is an intriguing speculation on the nature of paleolithic religion, offering scholars a valuable synthesis of anthropological, archaeological, and sociological research, and general readers an accessible account of how our forebears may have regarded the unknown.