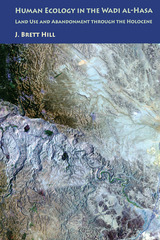 Human Ecology in the Wadi al-Hasa: Land Use and Abandonment through the Holocene
by J. Brett Hill
University of Arizona Press, 2006
Cloth: 978-0-8165-2502-7
Amid mounting concern over modern environmental degradation, archaeologists around the world are demonstrating the long history of such processes and the way they have shaped current landscapes. A growing body of evidence shows how humans have modified their environment for millennia, and contemporary problems cannot be understood without an adequate sense of this ecological past and the role of humans in it. The Wadi al-Hasa, a large canyon draining the Transjordan Plateau into the Dead Sea, has been the location of repeated cycles of settlement and land use for thousands of years. This book focuses on changing land-use patterns and their relationship to socio-political organization. Using a combination of archaeological and environmental data, Brett Hill examines the human ecology of agriculture and pastoralism from the beginnings of domestication through the rise and collapse of complex societies. Models of land use often consider political complexity as an important factor affecting mismanagement. Together with GIS erosion modeling and settlement pattern analysis, Hill evaluates the archaeological, historical, and environmental record spanning the Holocene to show how land use was affected by the rise of centralized authority. Yet populations in the Hasa maintained the ability to resist authority and return to a nomadic life when it became advantageous. This process emphasizes the power of local groups to pursue alternative strategies when their interests diverged from those of elites, creating a dynamic that reshapes the landscape each generation. Hill’s analysis contributes significantly to our understanding of the history of human ecology in the southern Levant, wherein current debates are complicated by research at different scales and by a lack of consensus on the importance of localized phenomena. It not only complements existing research but also seeks to refine models of processes in human ecology to demonstrate the effect of political organization on land mismanagement.
AUTHOR BIOGRAPHY
J. Brett Hill is a visiting assistant professor in the Sociology/Anthropology department at Hendrix College in Conway, Arkansas. He has conducted numerous studies using Geographic Information Systems (GIS) to evaluate how environment structured the economic and social opportunities available to ancient farmers and herders, and how people degraded their environment.
TABLE OF CONTENTS