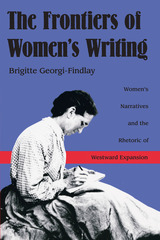 Although the myth of the American frontier is largely the product of writings by men, a substantial body of writings by women exists that casts the era of western expansion in a different light. In this study of American women's writings about the West between 1830 and 1930, a European scholar provides a reconstruction and new vision of frontier narrative from a perspective that has frequently been overlooked or taken for granted in discussions of the frontier. Brigitte Georgi-Findlay presents a range of writings that reflects the diversity of the western experience. Beginning with the narratives of Caroline Kirkland and other women of the early frontier, she reviews the diaries of the overland trails; letters and journals of the wives of army officers during the Indian wars; professional writings, focusing largely on travel, by women such as Caroline Leighton from the regional publishing cultures that emerged in the Far West during the last quarter of the century; and late-nineteenth- and early-twentieth-century accounts of missionaries and teachers on Indian reservations. Most of the writers were white, literate women who asserted their own kind of cultural authority over the lands and people they encountered. Their accounts are not only set in relation to a masculine frontier myth but also investigated for clues about their own involvement with territorial expansion. By exploring the various ways in which women writers actively contributed to and at times rejected the development of a national narrative of territorial expansion based on empire building and colonization, the author shows how their accounts are implicated in expansionist processes at the same time that they formulate positions of innocence and detachment. Georgi-Findlay has drawn on American studies scholarship, feminist criticism, and studies of colonial discourse to examine the strategies of women's representation in writing about the West in ways that most theorists have not. She critiques generally accepted stereotypes and assumptions--both about women's writing and its difference of view in particular, and about frontier discourse and the rhetoric of westward expansion in general--as she offers a significant contribution to literary studies of the West that will challenge scholars across a wide range of disciplines.
AUTHOR BIOGRAPHY
Brigitte Georgi-Findlay is an associate professor of American literature at the University of Bremen and was formerly a visiting scholar at the University of Arizona. She is the author of The Image of the American Indian in American Literature (1982) and Tradition and Modernism in Contemporary Native American Literature (1986), both published in German.