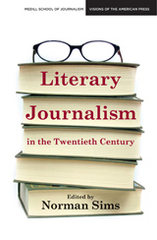 This wide-ranging collection of critical essays on literary journalism addresses the shifting border between fiction and non-fiction, literature and journalism.

Literary Journalism in the Twentieth Century addresses general and historical issues, explores questions of authorial intent and the status of the territory between literature and journalism, and offers a case study of Mary McCarthy’s 1953 piece, "Artists in Uniform," a classic of literary journalism.

Sims offers a thought-provoking study of the nature of perception and the truth, as well as issues facing journalism today.

AUTHOR BIOGRAPHY
Norman H. Sims is a professor of journalism at the University of Massachusetts, Amherst, the editor of The Literary Journalists, the author of True Stories, and the coeditor with Mark Kramer of Literary Journalism. He lives in Deerfield, Massechusetts.

John C. Hartsock is an associate professor of communication studies at the State University of New York at Cortland and the author of A History of American Literary Journalism: The Emergence of a Modern Narrative Form.
REVIEWS

"Sims's essay shows that journalism scholars have the potential not only to find new subjects for study and new methods of analysis but to develop new ways of writing about what they learn."---American Journalism

1. A Third Way to Tell the Story: American Literary Journalism at the Turn of the Century, by Thomas B. Connery

3. The Mother of Literature: Journalism and The Grapes of Wrath, by William Howarth

5. The Politics of The New Journalism, by John J. Pauly

7. The Politics of the Plain Style, by Hugh Kenner

8. The New Journalism and the Image-World, by David Eason

10. Artists in Uniform, by Mary McCarthy

12. Unsettling the Colonel’s Hash: ‘Fact’ in Autobiography, by Darrel Mansell